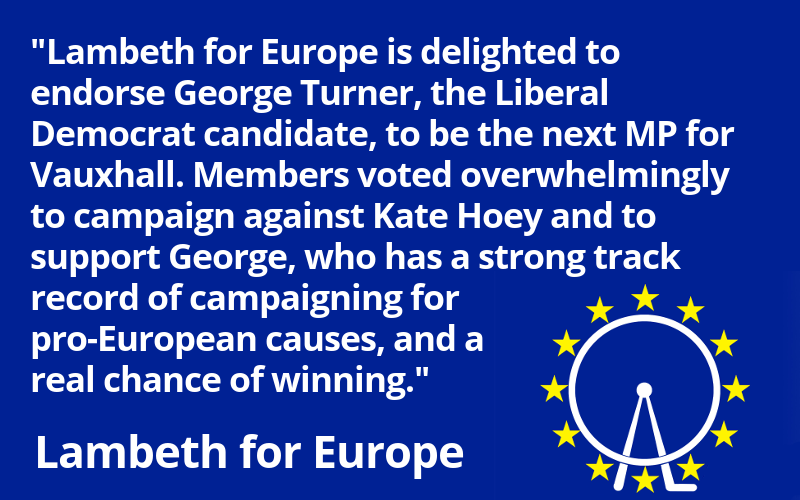 George Turner has won the endorsement of Lambeth For Europe after a poll of the campaign group's members.

He attracted 87.5% of first round votes.

The endorsement stated: "Lambeth for Europe is delighted to endorse George Turner, the Liberal Democrat candidate, to be the next MP for Vauxhall. Members voted overwhelmingly to campaign against Kate Hoey and to support George, who has a strong track record of campaigning for pro-European causes, and a real chance of winning."

George said: "It is a huge honour to receive this endorsement from Lambeth for Europe.

"The Lambeth for Europe team were the engine behind Lambeth's stunning result for remain in the 2016 EU referendum, where 78.6% of Lambeth residents voted for Remain.

"I hope their support can help us to deliver a similarly resounding result on June 8th."

From the moment the snap election was called, George has been setting out how he intends to give Vauxhall a powerful pro-European voice.

Lambeth's other Labour MPs during the referendum, Chuka Umunna and Helen Hayes, have both been backed by Lambeth For Europe in their re-election campaigns.

The statement in full:

Lambeth for Europe endorses George Turner for MP for Vauxhall

Lambeth for Europe is a proudly cross-party group that welcomes members from across the political spectrum who support a close relationship between the UK and the rest of the EU.

Lambeth voted 78.6% Remain in the referendum. It is mainland Britain’s most pro-European region, and it deserves MPs who represent its values. The general election offers a unique opportunity to campaign for this.

As MP for Vauxhall, Kate Hoey has ignored the views of her constituents in supporting an extreme and damaging Brexit and by refusing to vote to protect the rights of her non-British EU constituents. By campaigning alongside Nigel Farage and accepting money from major Ukip donor Arron Banks, she has aligned herself with the extreme right-wing of British politics, who peddled fear and intolerance during the referendum campaign.

After a vote of its members, Lambeth for Europe is delighted to endorse George Turner, the Liberal Democrat candidate, to be the next MP for Vauxhall. Members voted overwhelmingly to campaign against Kate Hoey and to support George, who has a strong track record of campaigning for pro-European causes, and a real chance of winning. Lambeth for Europe is excited to be supporting George’s campaign, will encourage its members to get involved, and will support his election in any way it can.

To join Lambeth for Europe as they campaign, contact them at: [email protected], twitter.com/lambeth4europe,facebook.com/groups/Lambeth4Europe/ or  lambethforeurope.org.