Lambeth Lib Dems think local streets should first and foremost be spaces for people. Walking and cycling should become safe, easy choices for all Lambeth residents, and the health and wellbeing of local people a higher priority.

We’re delighted therefore to pledge our support for ‘My Liveable London’, an initiative from London Cycling Campaign and Living Streets. A Lib Dem-led Lambeth Council would submit a high-quality Liveable Neighbourhood bid, based in an area with high potential for walking and cycling, taking major steps to prioritise people walking and cycling over private cars in the area. At the time of writing, the Lib Dems are the only party in Lambeth to have made this commitment.

We are privileged to have some of the UK’s most experienced and passionate campaigners in this field right here in our borough; if elected we will work closely with local cycling, walking and disability groups to identify the best opportunities to secure and use this central funding.

Transformative though such a high profile, well-funded scheme could be, however, our ambitions extend well beyond this. We want everyone in Lambeth to be able to travel around the borough safely and easily on foot, by bike and using mobility vehicles, and we want all residents to benefit from neighbourhoods where the safety of people is prioritised over traffic. To achieve this we will:

- Introduce simple measures like those used in the Netherlands to cut rat running and transform our neighbourhoods into safer places with a much greater community feel, while ensuring that those who need to use a car can continue to do so.

- Work with TfL and bike hire companies to bring thousands more rental bikes to Lambeth, making sure everyone can get their hands on a bike cheaply and easily when they need one.

- Double the amount of on-street cycle storage for those who would like to own a bike but can’t keep it indoors. 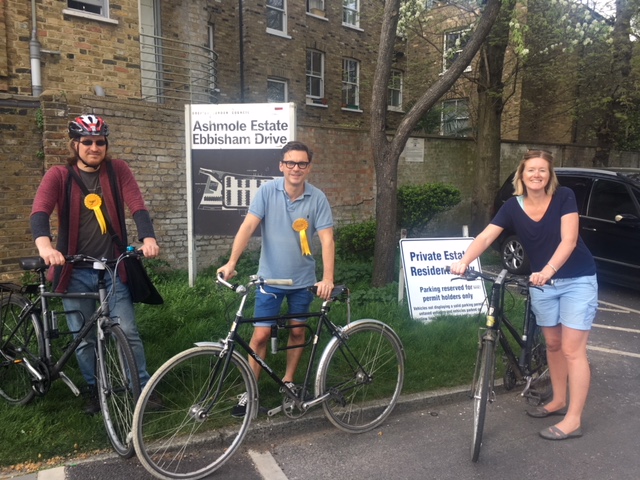 To encourage more people to switch to cycling in the south of the borough, our Streatham candidates will work with TfL to make the proposal for segregated cycle lanes on Streatham High Road a reality. While safe cycling infrastructure has been significantly increased in the north of Lambeth, little has been done to develop the A23 for cyclists. That’s despite the London strategic cycling analysis designating the A23 a high-potential route for increased cycle journeys. Cycle safety must be improved to allow more people in Streatham to safely take up cycling, reduce car use and bring down air pollution.

If you’d like to pledge your support for a more Liveable London and put pressure on Lambeth Labour, Greens and Tories to support this initiative, you can join the campaign here.