Today marks the end of shielding for vulnerable people in the UK & for 2.5 million who have shielded for over a year most have barely or not crossed the threshold of their front doors.

Please be kind, show understanding and tolerance for the majority in this group as it is an extremely anxious time & the fear of reentering the outside world they have not been part of for so long can not be underestimated. The government has advised clinically vulnerable shielders to remain careful, so please respect that advice.

It became legal to resume election campaigning outdoors in a Covid secure way as of 8 March. This was a relief, as the government had banned volunteer delivery of election materials, whilst allowing for paid delivery, which benefited parties with deep pockets, like the Conservatives or Labour.

We have been out delivering leaflets across the borough and are also resuming socially distanced canvassing, on a small scale.  This builds upon our phone canvassing operation that has been running through-out. 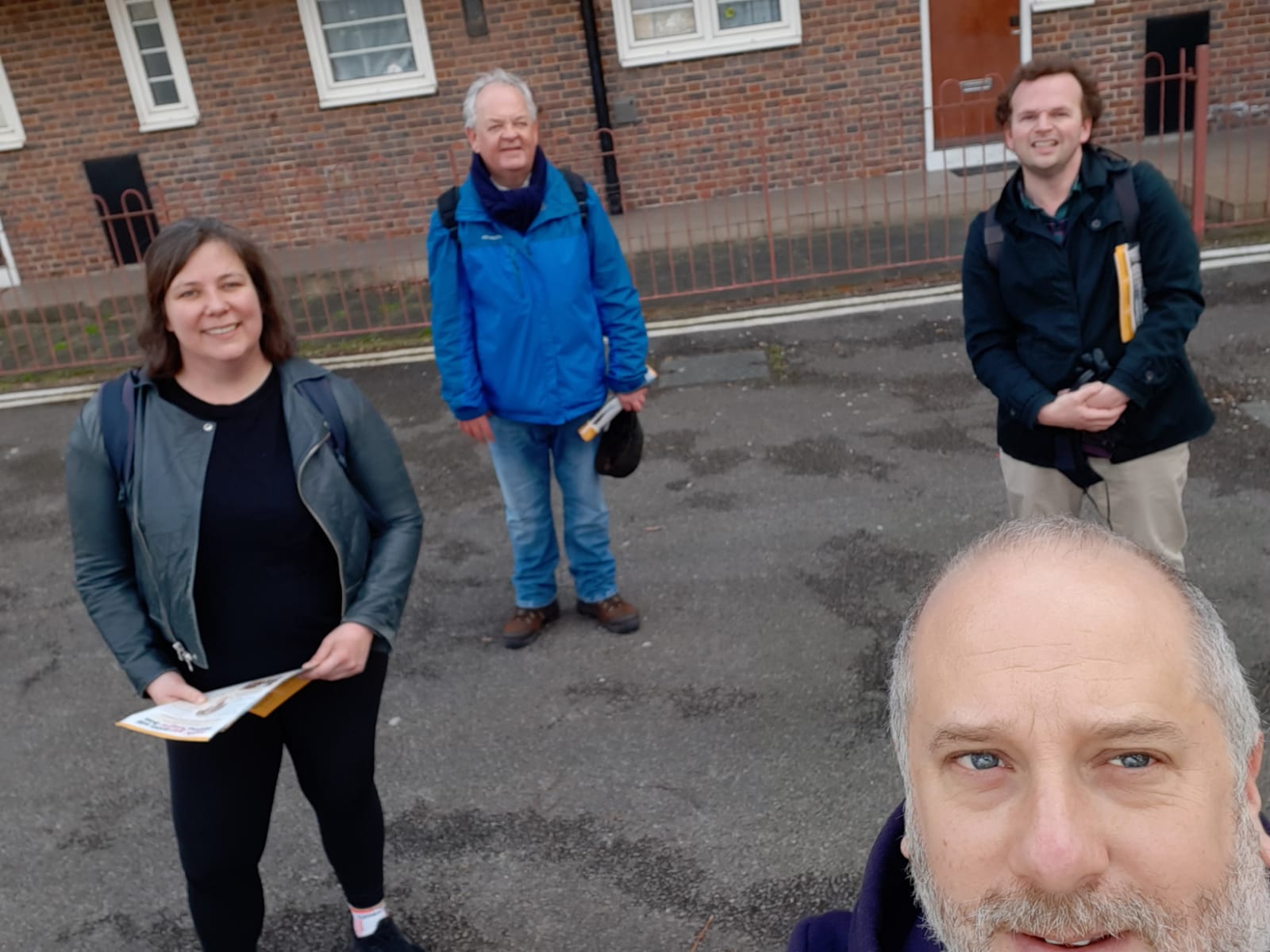 If you want to get involved, to deliver leaflets, phone or face to face canvass or donate, please get in contact!

Today word has come that the Conservative government intends to change London’s electoral system away from the current supplementary vote for Mayor to First Past the Post, citing a 2011 UK wide referendum on the Westminster voting system as the reason.  This is a democractic outrage.  In 1998 72% of Londoners voted for a new devolved Londonwide government, with a fairer voting system. We have not been asked since if we would like to change the system back to the unfair First Past the Post.

London’s electoral systems work for Londoners. The mayor is elected by a wider range of voters than a normal FPtP contest, needing more than 50% to win. We also have constituency AMs for local representation and Londonwide AMs. No party or group has campaigned against either system locally, nor has there been any public demand for a change since the system was put into place. It is dishonest of the Conservative government to pretend that there is any mandate to reduce Londoner’s rights.

If the Conservatives think it is a good idea to make London’s electoral system less proportionate and to remove more voting rights, then they should have the courage to put it to the people of London and campaign on it in this May’s mayoral election.

Reducing Londoner’s democratic rights should be something that Londoners get a say on.

Posted by Ben Austin | Updated 2021-03-13
STATEMENT BY LAMBETH LIBERAL DEMOCRATS.
The events that have taken place tonight on Clapham Common are the result of a failure of leadership within the Metropolitan Police. Responsibility for this must lie at the top and we call on the Commissioner of the Metropolitan Police, Cressida Dick, to resign her position immediately. This is also a decision for the Mayor, Sadiq Khan and the Home Secretary, Priti Patel as they are responsible for the Commissioner.
ReclaimTheseStreets attempted to organise a peaceful, socially distanced vigil. They engaged with the council and the police, but the police refused to approve the vigil, despite the court action ruling that protest was not unlawful. The events of tonight were avoidable, had the police engaged with the organisers.
Policing by consent requires the Met to work with the people and they have failed in this.
The people of Lambeth have been failed by the actions of the Met whose purpose is to protect our freedoms. The sight of women exercising their freedom to gather, mourn and express solidarity being assaulted by police officers is a gross betrayal.
1 reaction Share

Tomorrow at 6PM, Saturday 13th March a vigil has been planned for Clapham Common, following Sarah Everard’s disappearance last week between Balham and Streatham. This vigil is being organised by Reclaim These Streets, a group of women angry that streets are not safe places for women. This kind of vigil or protest has long been organised by women after such horrific events. Many people across Lambeth and London have said they will attend and it could well be one of the larger public events in the last year in Lambeth. This raises the issue of public gatherings during the Pandemic and the risks that might arise. The organisers believe the vigil can be held safely but now the Metropolitan Police have indicated they do not believe the protest should take place.  This is unacceptable.

The right to protest is important. The right to be safe from assault at all times is important. Public health is important. We must find a way to balance the former with the latter. We accept the organiser’s view that this vigil can be held in a socially distanced manner and that the attendees of the vigil will respect public health guidance. The police seem to disagree. But this is not the end of it, there is now a threat of serious financial and criminal sanctions against the organisers and attendees if the vigil takes place tomorrow.

Let us be clear, the police’s view is not accepted to be correct by a wide range of legal academics and public/human rights lawyers. A coalition of organisers and lawyers decided yesterday, Thursday, to bring an urgent case to the courts to rule on the issue. Our MP for Caithness, Jaime Stone has been working on getting an assurance from the Home Secretary that she will not support prosecutions against the organisers or attendees of the vigil. Other MPs from across the political spectrum have also supported the vigil. This is too important for party politics or tough on crime rhetoric. People must have the right to peacefully protest in a responsible fashion without being threatened with personal sanction by the police. If it turns out that the law does not allow for that, then the law needs to be changed.